Bitter gourd or karela (in India), is a unique vegetable-fruit that can be used as food or medicine.  As the edible part of the plant Momordica Charantia, it is considered the most bitter among all fruits and vegetables.  My children hate it but I’ve persuaded them to eat it. It has such a bitter taste which is difficult to acquire easily. So why would anyone eat such a vegetable?

In traditional Indian medicine, bitter gourd has used for a range of diseases, including colic, fever, burns, chronic cough, painful menstruation, skin conditions including wounds and assist childbirth.  In parts of Africa and Asia, the bitter gourd is used prevent or treat malaria and viral diseases such as measles and chicken pox. The plant grows well in the tropical climate and is found in Indian grocery stores in the West.  However, people are not aware of its amazing properties when they look at the strange warty surface of the gourd- indeed it is neither attractive to look at or to eat. 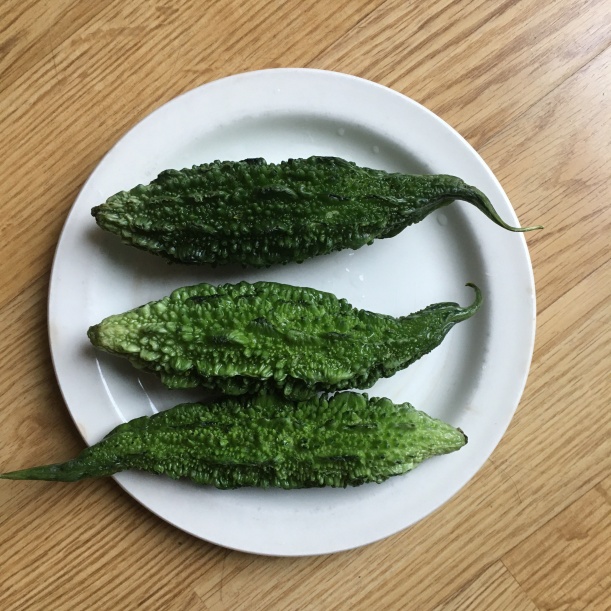 But research has proved that it has amazing medicinal properties- including fighting Type-2 diabetes and cancer.  In January 2011, the results of a four-week clinical trial were published in the Journal of Ethnopharmacology , which showed that a 2,000 mg daily dose of bitter melon significantly reduced blood glucose levels among patients with type 2 diabetes, although the hypoglycemic effect was less than a 1,000 mg/day dose of metformin.  The gourd contains at least three active substances with anti-diabetic properties, including charanti, which has been confirmed to have a blood glucose-lowering effect, vicine, an insulin-like compound known as polypeptide-p and lectin. Lectin is an appetite suppressant that reduces food intake and consequently thought to be a major factor behind the hypoglycemic effect that develops after eating it. In clinical trials in the USA show that extracts from bitter gourd can kill breast cancer cells and prevent them from growing and spreading.

Bitter gourd can be taken in several forms- a fresh fruit (squeeze some lemon juice and sprinkle salt), juice, and the seeds can be added to food in a powdered form. In traditional Bengali foods, it is eaten fried with turmeric and salt- this makes it quite palatable.  It can also be boiled with the rice, then the gourd eaten with some salt.  Some of the bitterness is lost this way.  Fresh or dried and made into tea- the Japanese like it this way and the tea is actually not bad at all- much of the bitter taste is gone especially with a teaspoon of honey in it.

Alternatively, bitter melon extract can be bought as a herbal supplement in health food shops. But because the gourd reduces blood sugar, the dose will need to be watched carefully and it is best to start with a small amount.

But considering everything it is an amazingly versatile medicinal plant. I’m trying to grow some from the seeds I’ve saved when summer comes and let you know how that goes!

I have been very guilty of loving my houseplants too much- by overwatering, over-fertilising and doing every other over-the-top thing.  I have lost many plants and also money.  So now I have reduced what I buy- though I still love to have plants in the house.  Contrary to the view that houseplants hugely increase the amount of carbon dioxide during the evening and night and therefore it is not good to have them inside the house, it has now been calculated that they only increase it by a very small amount.  This amount of carbon dioxide does not have any health disadvantage and the benefits of having house plants outweighs everything else.

During the late 1980’s, NASA did some research on houseplants as a means of providing purer and cleaner air for space stations. The plants filter out certain harmful compounds in the air and make it much healthier to breathe. My top three maintenance free and double use houseplants are-

Over the years, I have drastically reduced the numbers of houseplants but I was still overpowering them with water.  But simply keeping water levels low or watering them every 2-3 weeks works well.  A tip I got about watering houseplants when going away was to leave an ice cube in the pot- this has also worked well.  This time was the first time I didn’t find my houseplants nearly dead from overwatering after I returned from a three-week holiday (previously I used to sit my houseplants knee deep in water!).  My nearly dead poinsettia has even come back to life with glorious red leaves as you see below. I am now working on the orchid on which I will report later.