As I have mentioned before, it is worth buying potted herbs from shops, rather than trying to grow your own from seeds.  Growing from seeds has been lengthy and bit of a hit and miss. I do still try.  Recently I read about making the most of shop bought herbs.  One of the tips was to re-pot the herb after buying and the other tip was to cut off the tip.  I tried both techniques and this is what happened- 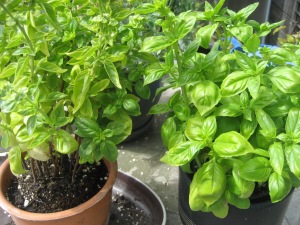 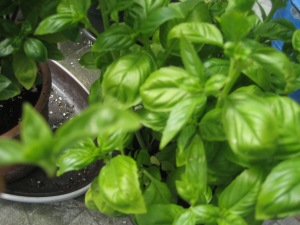 The pinched basil is more bushy, the leaves more rounded and tasty.  In the picture to the right, I am holding up the type of three leafed bud that needs to be taken out.  The re-potted one which has flowered as well, has more pointy leaves which are less tasty and a bit woody.  However, it might be worth doing both things- re-potting and pinching to encourage even more growth and I shall do that an dlet you know the outcome.  Both plants were bought about 3-4 weeks ago and I imagine should last me the whole summer if not more.

One thought on “making the most of basil”