I grew up in India where there were many household insects ranging from the dangerous such as flies, mosquitoes and termites- to others such as spiders, ants, bees and butterflies. These last three were considered beneficial or not harmful.  Now living in the UK, I find that bees are on the decline due to many factors including disease and the the widespread use of insecticides and pesticides.  Butterflies are also on the decrease- in 2012, the Telegraph reported that bumblebees, beetles and butterflies are at greater risk of extinction than lions and tigers, according to a global study by the Zoological Society of London. And as for ants, I am always amazed at finding ‘ant killers’ at DIY and hardware stores.  Why kill ants? 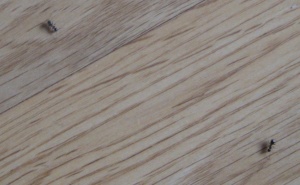 Most of the things ants do are good for us and the environment, including eating the larvae of fleas, spiders, bed bugs, flies, silverfish and clothes moths.  There is a notion that ants may contaminate your food by crawling on it. The remedy is simple- cover your food and keep it out of reach of ants.  I find a seasonal invasion of ants and I watch them with fascination as they go about looking for food.  The first scouts can be held back I realised by putting out some water soaked cloth on the floor- I saw that when it rained they did not come in, only in the heat did they come in to find water.  I had a great benefit from the ants- I found that they had been eating the tiny mites growing on my houseplants.  Every year I have had disasters with my houseplants, particularly with the delicate parrot plant.  This plant you see below was saved from the descendent of another parrot plant and then after that by cutting of the mite ridden branches in the new plant.  I didn’t think it would survive the extreme pruning and by being left out in the cold but it did- parrot plants can also be resilient.

This year I was dreading the return of the spider mites but noticed that my friends, the ants had been busy on its branches.  Now the plant is growing well and the ants return from time to time to clean off any mites that may come back. 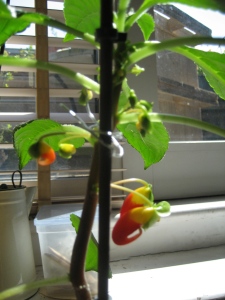