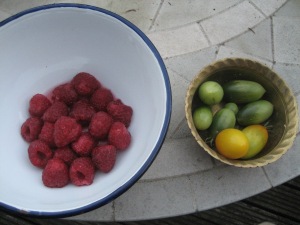 I returned from a three week holiday to find that there had been storms in the UK and my little garden was a little wrecked.  My prized crop of italian plum tomatoes which had not ripened were on the deck and there were raspberries which needed to be eaten, otherwise they’d go off. Well, we ate as many raspberries we could and then I thought about making a chutney with the rest.  Chutneys which originate from India are an accompaniment to a main meal, eaten at the end.  In the West, chutneys are eaten with crisp breads, cheese, salad and meats- just about anything.

This is an easy recipe which can be adjusted to any amount of fruit lying around (which is what you see in the second photo of unripe tomatoes and raspberries).  I used a tablespoon of sunflower oil and put it on medium heat.  When the oil was ready, I threw in a pinch each of cumin and fenugreek seeds; and two birds’eyes chillies until the cumin seeds ‘swelled up’. Then I put the cut tomatoes and whole raspberries in.  When they softened, I added molasses- one and half tablespoon.  Molasses are a good alternative to white sugar as they contain fibres, minerals and iron and more, see link below-

Molasses are used in traditional Indian cooking, sugar being an unknown ingredient.  I also added a pinch of turmeric.  After less than 15 minutes, the chutney was ready. With a bit of zing- this is a delicious chutney! 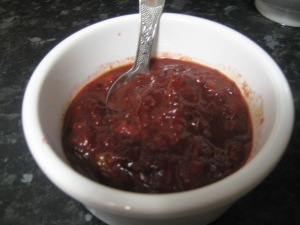